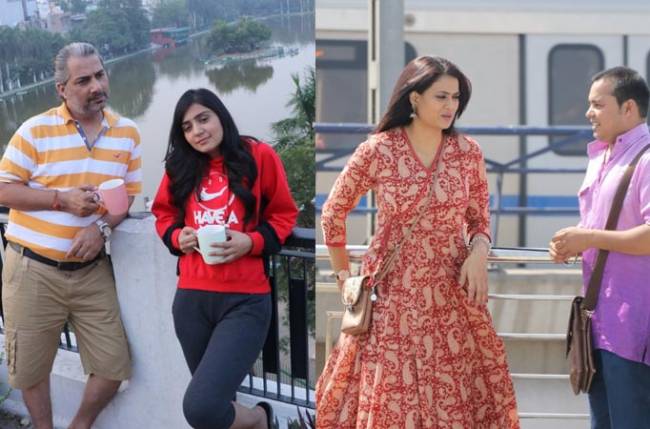 Actress Shweta Tiwari known for her versatile roles in Television soaps is all set to make her comeback with Sony Entertainment Television’s show Mere Dad ki Dulhan. The latest offering, Mere Dad Ki Dulhan, based out of urban lifestyle in Delhi revolves around father-daughter duo played by Varun Badola and Anjali Tatrari. Shweta Tiwari who nails each character to the tee and leaves a lasting impression will soon be seen in another refreshing character of a ‘new age woman’ named Gunnet.

Varun Badola, Shweta Tiwari and Anjali Tatrari were recently in Delhi shooting across various locations in Model Town, Chandni Chowk, Subhash Nagar and Jawahar Gate for the show. It was observed that the streets around these areas were blocked as the residents gathered in large numbers to catch a glimpse of the actors. Shweta mentioned that she enjoyed her stay to the fullest with yummy street food and interesting company of co-actors Varun and Anjali. “We shot in real locations so it was a lot of fun. I gorged on a lot of Purani Dilli specials, rode an e-rickshaw and even interacted with a few fans. Varun and Anjali are fun to hang out with and all of us are foodies so there was neither a dearth of good food nor chatter,” she says.
Being a Delhiite, Varun didn’t lose the chance to take full advantage of the schedule and visited his home. “I make it a point to stay at home whenever I am in town for shoot,” he tells us, adding, “The good thing about Delhi is that you are spoilt for choice when it comes to food. From a thela wala to a five-star restaurant, you can eat as per your budget not worrying about the taste or quality. Food here is simply amazing.”