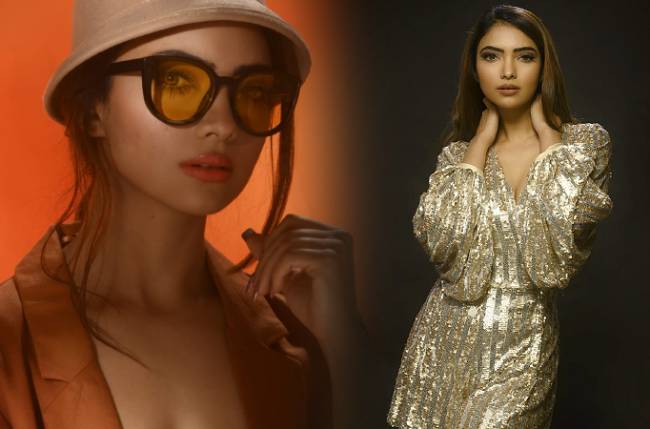 The KumKum Bhagya star Pooja Banerjee is one of the most stylish stars in the TV industry. She never fails to impress her fans with her sartorial outfit choices. The style diva is on the top of her fashion game and knows how to make unique style statements. Known for her role as Nivedita Basu in Kasautii Zindagii Kay 2 she is absolutely killing it as Rhea Mehra in KumKum Bhagya. The Swim Team actor has always created buzz owing to her unconventional fashion choices!

The style icon knows how to rock the Western as well as Indian attires. The actress who doesn’t only wears the attires but also possess the aura and grace to carry them. We came across some breathtaking pictures of the Bong Beauty which will surely make your day.

The beauty can be seen wearing a golden colured one-piece dress! The look is perfectly complimented with open hair and nude makeup look. The brown hypnotic eyes will make anyone fall for them. Wouldn’t you agree?

In this look the actress is seen wearing a pink off-shoulder frilled top along with a rugged denim and sneakers. The starlet who is seen sporting a tied hair look in this one is killing it overall. And those brown eyes, Uff! Aren’t they too much to handle?

Pooja is an absolute stunner and there’s no doubt about it! With a humongous fan following on her social media she blesses the feed of almost every single fan of hers with her jaw dropping pictures. In this look the diva is seen wearing an off-shoulder black one piece with semi-tied hair and a light makeup look. Isn’t she just burning your phone screens with her hotness?

Pooja can be seen wearing a royal blue monokini along with a floral jacket and ochre coloured shades. Pooja is seen flaunting the most beautiful curve of her body which is her beautiful smile! Aren’t these hot-bod pictures an eternal bliss to drive away all our thrifty thursday stress?

A picture you can’t miss!

Last but not the least, in this one Pooja is seen wearing a denim jumpsuit with a white T-Shirt inside and a long grey coloured shrug. She is seen wearing white sneakers in this one, reminds us of Anne Hathway’s one of the characters in which she sported a similar look! Well, the way she is posing in the picture is one of the possible reasons why we should put the blame of increasing global warming on Pooja. Isn’t it?