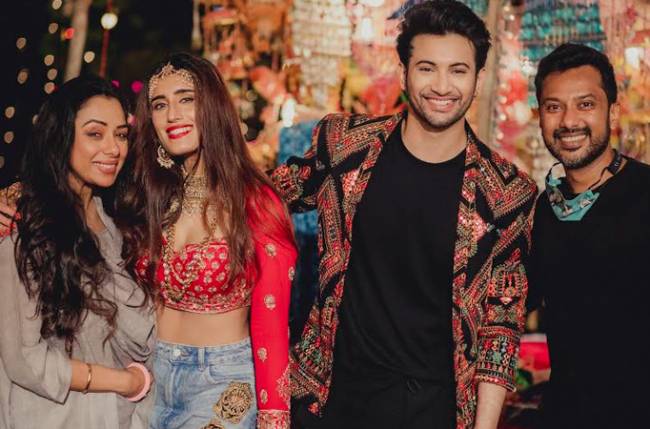 Vijay Ganguly is a name who needs no introduction; he is an ace choreographer. Vijay has recently directed and choreographed a song titled Shola produced by Anil Ganguly Production. Vijay says, “Shola is a fun, peppy song featuring AKASA and Rohit Saraf. The song is composed by AKASA and Charan. AKASA is one of the most talented singers we have today.” When Sony music approached me with the song and I heard it, I instantly thought of something fun, exciting and crazy. So we integrated a fun story with the song and dance. The story takes place in a mela in a small town. We’ve tried too keep the simplicity of the small town but have also added colours and a lot of vibrancy.”

Talking about his experience shooting under the COVID protocols, Vijay says,”We shot this the video in mumbai. Since it was a mela set up, we needed a lot of people to fill the space but because of all the COVID restrictions and precautions, we had to cut down on the number of people. It’s not easy to shoot during the pandemic, but still so many technicians get together to make sure that we create content for the audience to be entertained. We took all necessary precautions to film this song. It was a full-filling experience.”

Speaking about heartthrob Rohit Saraf, Vijay says,” Rohit is phenomenal. I didn’t know that he was a trained dancer untill we came into rehearsal because the last song I had done with him for the webseries Mismatched did not have any dancing. But I was pleasantly surprised to see how well he dances and I knew people are going to enjoy his dancing in the video.” Vijay has had a long journey with choreographing, and he adds,”After being in the profession of dance for 14 years, I discovered that I was happiest on a film set when I assisted in choreography for films like Bunty aur Babli, Taare Zameen par, Mission impossible (ghost protocol), etc. Since I always wanted to learn more, I started assisting Mr Anurag Basu as an Assistant Director for the film Jagga Jasoos. Since the film was a musical, Mr Basu trusted me with the the song Galti se mistake, so my journey as a independent choreographer started form there. Galti Se Mistake from Jagga Jasoos got me the Filmfare, Iifa, Zee Cine and more awards. Before Galti se mistake, I did a song called Nachange saari Raat with Yami Gautam and Pulkit samrat.

How did you get the production house with your father’s name? “My father was a director/producer, he’s made films like Kora Kagaz and Saheb and also won two national awards. He was someone who has been respected a lot by the fraternity. His production house was called RV films, that was on the names of Rupali Ganguly (my sister) and me Vijay. So when my father was unwell in 2016, the thought came that there must be a production company in his name. We also discussed this with him and after he passed away, we came up with this. Anil Ganguly Production was born to keep his legacy alive.”

On his father’s contribution in his life Vijay says,”Everything I know today is because of my father, not only knowledge about films, but also life. He is a legend. My biggest learning from him is hard work and honesty.”

So what are the plans with your production house now? “As a production house, my constant approach is to create more and evolve every-time, be it music videos, commercials or feature films. Bring opportunities for newer talents. And make content that keeps my fathers name proud and alive.”