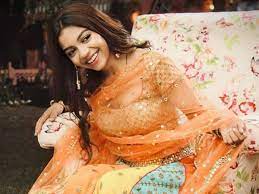 Star Plus’ show Pandya Store hit the small screens just a few months back and it has become everyone’s favourite in no time.

Pandya Store has been constantly witnessing some interesting twists and turns in the story leaving the viewers hooked on the show.

After Dev-Rishita and Shiva-Raavi’s wedding, things have changed in the Pandya family.

While Raavi and Shiva’s marriage was a big compromise but things are getting better between the duo with time.

We have seen how Rishita is having a problem adjusting to the members of the Pandya family.

She had earlier insisted Dev stay alone with her in a nuclear family.

However, Dev who is extremely attached to his family couldn’t fulfil this wish of Rishita.

Rishita has constantly been at loggerheads with many family members.

Shiva and Krish decided to teach Rishita a lesson and scared her. Their plan was successful, however, they soon got exposed.

The scary sequence was full of laughter and some intense moments followed by it.

Well, in an exclusive interview, Simran Budharup who plays the role of Rishita on the show.

We asked if there is any difference between her and her character Rishita.

Responding to this, Simran said, ”The only thing which is extremely different from me is that Rishita is extremely rude. (laughs).”

The actress further said, ”Everyone on the set tells that no one can be a better Rishita than me. I am pretty blunt but I make sure I don’t hurt anyone’s feelings with my words because I believe in Karma.”