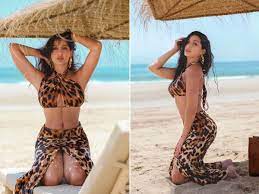 The Moroccan beauty Nora Fatehi is killing it yet again with her fresh jaw-dropping bikini photos. The actress who is all set for the release of her upcoming film ‘Bhuj: The Pride of India’ dropped some too-hot-to handle pictures of herself and her fans can’t keep their calm.

Sharing the pictures on her Instagram, she wrote, “The sun would set so high..Ring through my ears and sting my eyes.. Your Spanish lullaby

She has shared several posts and could be also seen posing with a horse in one of the pictures.

Recently, Nora has garnered more than 30 million followers on her Instagram handle and her fans congratulated the stunner on this special occasion.

For the unversed, Nora Fatehi earned name and fame after featuring in the ‘Dilbar’ track for John Abraham starrer Satyamev Jayate. The track got her ‘Dilbar girl’ tag as well.

The Moroccan beauty was first seen in the reality show Bigg Boss season 9. She made her Bollywood debut with Roar: Tigers of the Sundarbans. Her popularity in Telugu cinema began with hit songs in films such as Temper, Baahubali: The Beginning and Kick 2.

On the workfront, Nora recently featured in music video ‘Chhor Denge’ alongside actor Ehan Bhat. Crooned by Parampara Tandon, the revenge song has crossed 70 million views on YouTube since its release. She will be next seen in Abhishek Dudhaiya’s ‘Bhuj: The Pride of India’.