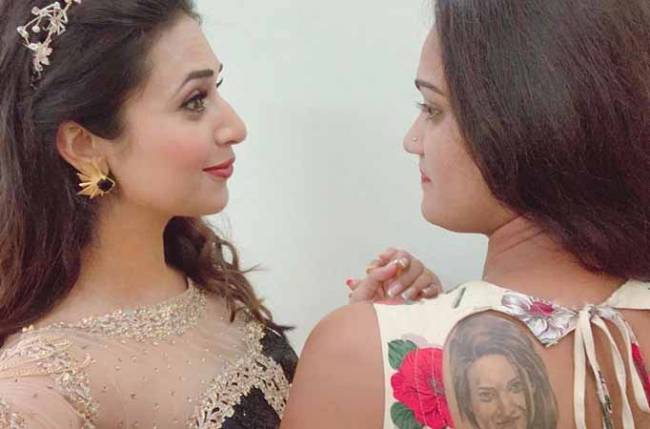 Divyanka Tripathi Dahiya, who is one of the most popular television actresses, is pretty active on social media. The actress, known for her acting chops, has a huge fan following who look up to her for inspiration.

And now, a die-hard fan of the actress has taken the bar of fangirling to the next level by tattooing Divyanka’s name on her wrist and face on her back. The actress, who is currently playing the lead role in the hit television soap Yeh Hai Mohabbatein, took to her Instagram account to share two pictures of herself with the fan which flaunted the two tattoos and also wrote a long post to thank the fan.

Divyanka, who made her debut with Zee TV’s Banoo Main Teri Dulhann, captioned the same as, “Yesterday morning while traveling I wrote to my husband- how lucky I feel getting so much love in life, must be some past life Karma…and Voila! I met a girl in evening who couldn’t utter a word but the etching on her spoke volumes!

No, it’s not that I support or not support tattoos. That’s a personal choice. But LOVE! Love overwhelms me. I may or may not be deserving of it. But love takes my breath away, makes me believe in all things good!”

She added, “Grabbing this opportunity to thank all those who have a place for me in their heart! That’s the best place I would love to be in. I may be a known figure, but I keep forgetting that! What I can’t forget are these moments of sweetness…and will remain indebted to God himself for giving me this opportunity to have you all in my life.#TherapeuticLove #NazarNaLage.”Divyanka’s husband Vivek Dahiya commented on the post. He wrote, ‘Such impact!’