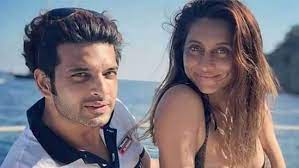 Yeh Rishta Kya Kehlata Hai actor Karan Kundrra’s entry in Bigg Boss 15 house has surprised his fans. While his personal life and break-up with Anusha Dandekar had grabbed eyeballs, he seems to be the perfect contestant to participate in Bigg Boss 15.

A few days before entering the controversial reality show, the actor in conversation with Times of India has spoken about his decision to do Bigg Boss and revealed his relationship status. He also shared what he would do if his ex-entered the show.

He said that he has been approached for the show for the past eight seasons, but couldn’t manage as he was busy with other commitments or travelling and thought he was not made for such shows. But, however, the makers of the show could convince him this time, after they gave him a new outlook and things fell into place, and hence, he decided to do the show.

Earlier, Anusha had hinted at Karan cheating while announcing their split in one of her posts. But when Karan was asked about the same, he said that it is two-year-old thing, and now his life is an open book, be it his relationships or work. He said that there is nothing to hide.

He further added that if people ask him the same old thing repeatedly, he will give the same answer. When asked what if Anusha entered the house, the Kitni Mohabbat Hai actor said, “I have no problem with it. In fact, hum saath mein rahe hain. I know her very well.”

In addition to this, the actor went on clarifying that he is single and looking forward to mingling. He said, “I have done enough shows to realise that it is a situation, which prompts you to take an emotional decision. I don’t want to make a decision like that.”

“So, if I see a mature person and if there is a connection, which might happen by virtue of spending quality time with housemates, agar mujhe doubt hua ya trust issue hua ki everything will change eventually as soon as the person will get her phone, then I doubt anything will happen. Even if something happens, it will depend on how mature the other person is.”