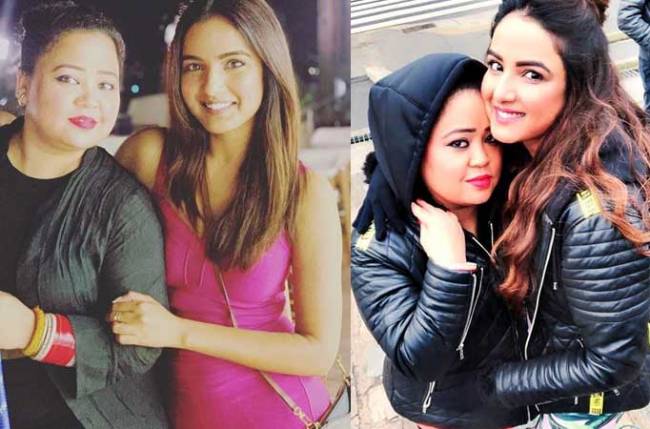 Actor Jasmin Bhasin is currently adding a lot of fun and jazz in Bigg Boss 14. While many people make lifelong friends in that reality show, Jasmin already has a friend, whom she considers her best stress buster. It is none other than well comedienne Bharti Singh. Jasmin has worked with Bharti and her husband Harsh Limbachiyaa in Khatra Khatra Khatra, Khatron Ke Khiladi and also in Funhit Mein Jaari which is currently on air. While right now Jasmin is a contestant in Bigg Boss 14, Bharti and Harsh entertaining the audience with their gig Funhit Mein Jaari.

Jasmin has nice things to say about the couple. “Good friends are very important. Khatro Ke Khiladi gave me good friends in the form of Harsh and Bharti. I had worked with Bharti-Harsh in the past during Khatra Khatra Khatra. In one of the spoof, I have played Bharti’s mom in Funhit Mein Jaari. Playing mom to Bharti was a lot of fun,” says Jasmin. While in an industry where people are after fame and money, it is difficult for people to make friends who remain unconditional. For Jasmin, Bharti has been the friend, who makes her smile and forget whatever stress has been bothering her. “Bharti makes you laugh all the time. Her sense of humour is amazing. She is very easy going as a person. Talking to Bharti makes you forget all your worries,” shares Jasmin.