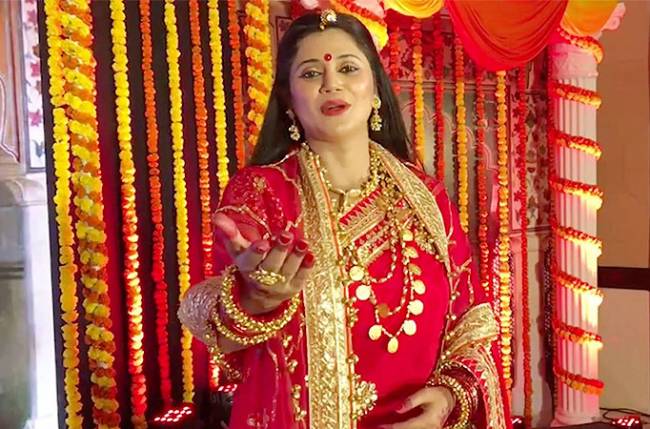 Beautiful and talented Karuna Pandey, who is currently seen as the evil Kusum Sundari on Colors’ popular daily Devanshi (Full House Media), is winning applauses for her performance on the show.
As an actress, Karuna loves to experiment with roles and she is happy to have a negative part in her kitty even though it’s challenging.

In a candid conversation with Karuna talks about playing an evil character. She told us, “Sometimes it becomes difficult to play an extreme evil character because I am very different from what Kusum is. As an actor, it happens that when you are not the person in real that you are playing on-screen, you get bit nervous as a human being. Sometimes I need to motivate myself to play such an evil character and there are times when I feel bad and hate myself after I get out of my character. In the end, I have to do it because I am an actor and it’s always enjoyable to play something different on-screen. With experience and by developing an interest in playing your role, you grow as a performer.”

“I have played positive roles before and I would like to experiment with different parts in positive, negative and comedy genres too. I want to break myself in every character as an actor and that’s what we all want.”

An actor who plays a negative role often gets bombarded with hate mails by the audience but Karuna is happy with the positive response for her performance. “It’s a good and encouraging fact that the audience is accepting me even after I being so evil. They like watching what Kusum is doing. It motivates and encourages me as an actor. The audience has become intelligent these days; they know that we are acting. They will hate you at that moment, but at the end they appreciate you for the performance.”

Last but not the least, we also asked Karuna about the little one Kashvi Kothari aka Devanshi. She told us, “My off-screen bond with her is wonderful. Kids are cute and enjoyable to work with and indeed she is. She is a very sweet and hard working child.”
Keep up the good work Karuna.