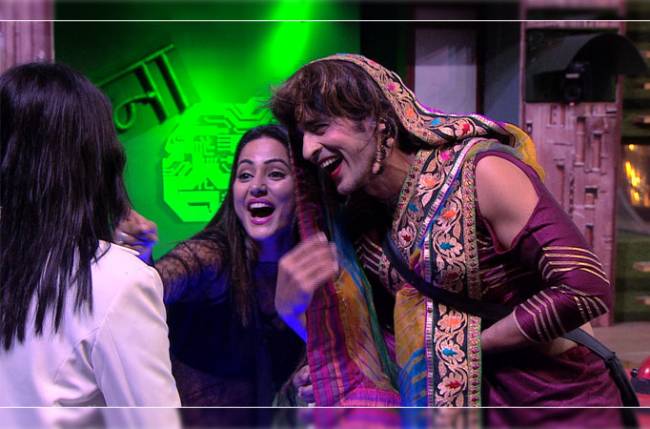 Mumbai: Emotions make us human and in this game of BB Lab, contestants have to do their best to mask their feelings. Today, the tables turn as Vikas, Shilpa, Luv and Arshi become robots while Hina, Priyank, Hiten and Akash take on the role of Karamchari. Mad scientist and sanchalak Puneesh Sharma’s experiment on emotions in the laboratory will turn out to be a golden opportunity for the contestants to aptly convey their feelings for each other.

Known for being grounded and sorted, Hiten Tejwani today reveals a new side of his personality. In a bid to win the task, he dons the avatar of Arshi Khan. Mimicking her accurately, Robots Vikas, Shilpa and even Arshi appreciate his attempt of making them laugh.

On day 2 of this ‘emotional task, karamchari Hina Khan and Priyank Sharma are set to plot out the perfect revenge against Robot Vikas. Masking their real grudges in the name of the task, they let out their hidden sentiments that have been bottled up until now.

Hina very angrily tells Vikas that he is good to Shilpa only because he fears her and makes him aware that he lacks chivalry. Priyank then lashes out at Vikas saying that it was wrong of him to drag Benafsha and Divya in the game for the sake of winning the task. He also yells at him saying how dare he ask him anbout friendship and how it is maintained. He further clarifies that what happened between him and Benafsha wasn’t a drama as Vikas thinks. Priyank also tells him that he shouldn’t be commenting about things he is not aware of.

Vikas had also remarked that Priyan;s relationship with girls are all FAKE! Priyank tells Vikas he is no one to say that and he further says that Vikas is not fit to be called brother. Hian tells him he is th emastermind, however it is not necessary that he will be right all the time. She also said it was her who brought Priyank and Vikas together after their fight, however, he conviniently forgot that

However, Vikas doesn’t deter much and he barely gets angry! Finally Tea, Vikas wins the Luxury budget ROBOT task.