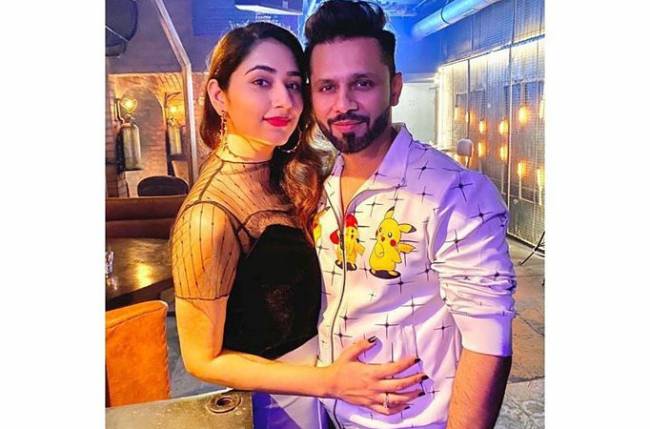 Rahul Vaidya has become a topic of discussion currently on the internet. The singer made headlines after the Bigg Boss 14 promo came out, in which he was seen proposing out to his girlfriend and actor Disha Parmar for marriage.

Meanwhile, Rahul went on to confess his true feelings for her apart from sending her the wishes.

Now, we came across a video in which Disha has finally reacted to Rahul’s proposal.

One of Disha’s friends, Maanika Dhhaandaa, took to her Instagram story and shared a video in which the actor is cutting her birthday cake in the presence of her friends.

When her friends asked her are you happy and if they are the reasons, she quipped “Obviously!”. Then one friend of Disha asks if she is happier because ‘someone’ proposed her on national television. On hearing this, Parmar turns red while blushing and hides her face cutely.

Meanwhile, Rahul also shares a proposal video, wherein he is seen writing ‘Marry me’ message on his T-Shirt. He also holds a ring while he bent on his knee to propose Disha.

It was in last year when Rahul hinted about seeing Disha. He told, “I met Disha through common friends two years ago. We hit it off instantly, and often hang out together. It would be premature to say that we are in love, but yes, we are trying to get to know each other well. Disha is a simple girl. She is also very kind and I like those qualities about her. A few days ago, I had a music concert in Pune, so I invited her to fly with me. Since we are best friends, we just thought of spending some quality time together. I don’t know what the future holds for us.”.