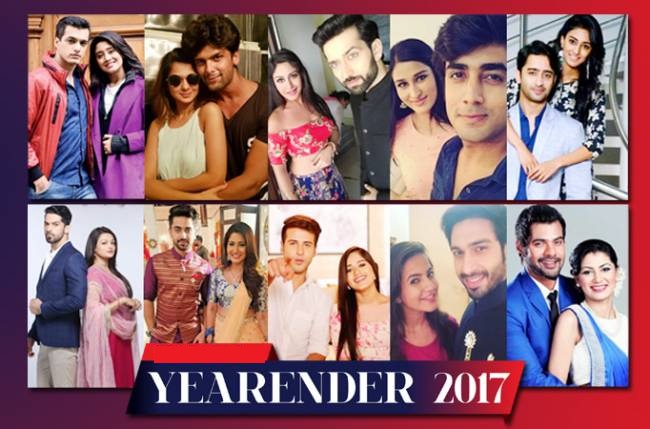 Love stories are always a hit on television!!!

Actors put in their heart and soul to the roles they portray on-screen, and we must say that it’s not an easy job to create a sparkling chemistry on-screen when it comes to love stories.

Some romantic stories manage to captivate the audience and the credit goes to the magic that the artists create.

As the year 2017 is coming to an end, loan trading lists down the top 10 on-screen hit pairs who have set television on fire with their crackling chemistry.

The obsessive love story of Maya and Arjun struck chords with the audience in no time. Their intense romance and steamy scenes had set the screens on fire. Arjun and Maya are surely the hottest on-screen couples on television. A unique love story where a boss (Maya) falls in love with an employee (Arjun); no one ever imagined that the love story will turn out to be an obsession drama.

It won’t be wrong to call this jodi KhidkiTod. Be it their knok-jhok or their romantic or emotional scenes, Nakuul and Surbhi nail it with their immaculate performances. Their recent intense ‘Lal Ishq’ scene created a lot of buzz and the duo had set television on fire with their intense chemistry.

This on-screen jodi has gained a lot of appreciation from the fans with their chemistry. Their love story is full of ups and downs and that’s what keeps the viewer’s attention pulled towards this couple.

No doubt, this TV couple has successfully carried forward the legacy of Akshara and Naitik! After the exit of Akshara and Naitik, the fresh pairing of Kartik and Naira became a huge hit in a short span of time. Kartik’s ideas to woo her lady love, Naira makes every girl swoon over him.

The story of Shaurya and Mehek is quite relatable to a common life love story where a girl who is a cook by profession, falls in love with a businessman. Social media is on a boom these days and the couple sets a good example of people acquinting on social media, falling in love and then getting married.

Zindagi Ki Mehek is Karan and Sameeksha’s debut show and their hardwork is seen with all the fan adoration the show is receiving. And yes! We must say, the actors do complement each other!

The show has a different concept but the love story of Suraj and Chakor is what makes it truly special and a visual treat for the audience. Their cute knok-jhok, separation, emotions, hatred and romance has always been loved by the audience. No doubt, Meera and Vijayendra justify their roles beautifully.

This new on-screen jodi is the youngest of all but their love story has turned out to be a hit in a short span of time. The struggle of a lover boy, Ahaan, who can go to any extent to get her love, Pankti released from the evil is winning hearts all over. The fresh pairing of Ritvik and Jannat is surely a treat to watch.

This long running show on Zee TV’s recently completed 1000 episodes. The series came up with its spin-off series Kundali Bhagya and a lot of changes have been inculcated in the storyline. However, the one thing which has remained constant is the popularity of the on-screen couple, Abhi and Pragya. The jodi is still loved by many fans across the globe and their chemistry never fails to amaze the viewers.

Pooja and Naren joined the wagon of Rajshri Productions with Piya Albela. Their love story has a perfect blend of simplicity and romance. Also, the actors – Akshay and Sheen have got an opportunity to explore with their respective roles. Their unique love story is what makes this jodi a hit one.

The popularity of this on-screen couple soared high in no time. Their love story finally won over all the hurdles and after facing trouble in their paradise, the duo reunited and turned out to be parents of two adorable kids, defining parenthood on a different level. Their popularity was grown to an extent that the show was speculated to make a comeback with another season.