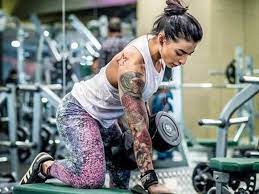 Gurbani Judge aka Bani J became an sensation after she appeared on MTV Roadies 4, where she was the runner-up. She hails from Chandigarh and is a fitness freak. She also loves tattoos and has a quirky fashion sense, which has garnered her immense popularity.

The diva loves posting her fitness journey and style statements on social media. Her workout pictures are giving us the major fitness goals. Bani J is quite outspoken when it comes to expressing her views against the prevalent gender stereotyping in society.

She has been a part of several TV shows including ‘Fear Factor: Khatron Ke Khiladi 4,’ ‘I Can Do That’, and ‘Bigg Boss 10.’ Bani J has hosted several seasons of ‘MTV Roadies’ as well and has worked in a few web-series. She featured in Punjabi film ‘Zorawar,’ Telugu film ‘Thikka’, and Tamil film ‘Valimai.’

Have a look at her fitness journey.